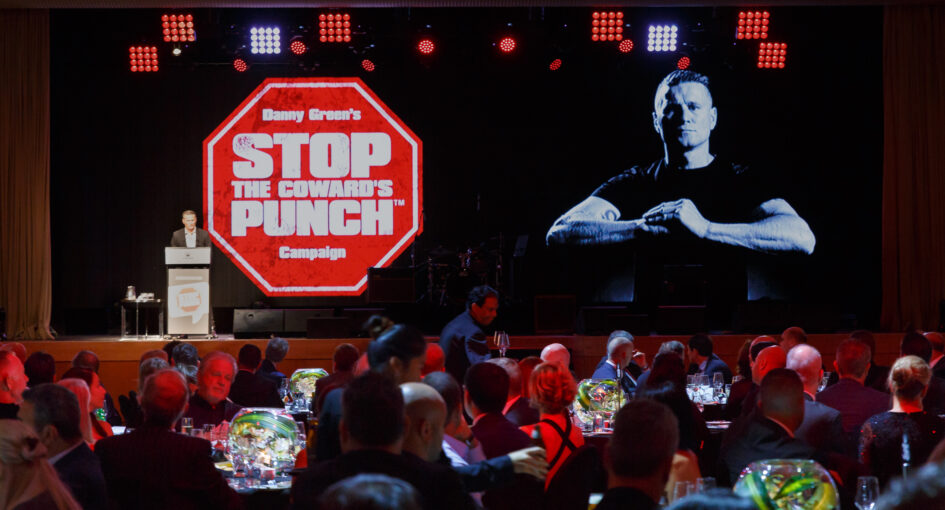 Craig Lovett appointed to the inaugural board of the Danny Green Cowards punch campaign, joining notable Australians in the leadership of this worthy cause

Danny Green’s Stop the Coward’s Punch Foundation update, a message from Danny himself.

Despite the global turmoil caused by the Coronavirus pandemic I am pleased to update you on the considerable progress the Stop the Coward’s Punch (STCP) Foundation has made in recent months as we set about educating Australians about the scourge of coward’s punch attacks and the senseless harm it can cause. You will recall that the STCP Foundation’s purpose is clear and simple: to facilitate a harm prevention awareness campaign via education and publicity aimed at reducing the number of senseless ‘coward’s punch’ attacks in our communities.

As you know, the Coronavirus has led to unprecedented lockdowns which means families and other Australians are in close proximity 24/7. Anecdotally, we hear that domestic violence is on the rise and alcohol sales have spiked. Thousands of Australians have lost their jobs or their businesses and many are anxious about how they will make ends meet. For these reasons, I believe the work of the STCP Foundation been never more important and there is a great deal of activity and new initiatives to update you on.

Firstly, I would like to recognise and thank the Tasmania Liberal Government, in particularly Attorney-General, The Honourable Elise Archer MP for the ongoing commitment to keeping Tasmanians safe and to supporting our Campaign. The recent amendments passed in late March 2020 to the Criminal Code Act 1924 and the Sentencing Act 1997 sends a strong message that senseless and cowardly acts of violence will not be tolerated and ensure Tasmania’s police and courts have adequate powers to hold offenders to account. A further reflection of the Tasmanian Government’s ongoing support to this cause is demonstrated in their recent commitment of $200,000 towards our ‘Stop the Coward’s Punch’ Campaign. What a magnificent gesture!

Secondly, I would like to acknowledge that the Foundation’s Board has been extended following an important piece of governance work by our pro bono lawyer sponsor, Minter Ellison.
As a result, the Foundation Board will be chaired by Perth based chartered accountant Justin Manolikos. Justin has been a close friend and confidant of mine for more than 35 years and was instrumental in the creation of the Foundation. Also joining the Board are Paul Ramler AM, Christopher Paterson, Wayne Healy, Craig Lovett, Christine Nixon APM and myself.

These appointees will ensure the Foundation has the necessary and diverse skills and experience needed to deliver an effective campaign that ultimately ends the scourge that coward’s punch attacks are having on the Australian community. I must say I am incredibly humbled that such an auspicious group of leading Australians are prepared to put their name to the STCP Foundation. It is a recognition of what we have achieved so far – and excites me about what is ahead!

I am also pleased to advise that Hayley Panteli has been appointed our inaugural Operations Manager and we welcome her on Board. Hayley first worked on the campaign fundraising dinners and was extremely hands on and absolutely suited to the role she will now undertake. Her drive and passion for the campaign are undeniable. Hayley will operate from Melbourne and service the Board and coordinate the many diverse and important projects that we currently have underway. These include a Global First Research Project with the Victorian Institute of Forensic Medicine (VIFM).

Many of you will recall the impactful comments made by Dr Jennifer Schumann at our 2019 Dinner at Crown. Dr Schumann is a forensic pharmacologist and toxicologist, with over 13 years’ experience interpreting the involvement of alcohol and other drugs in death. The Foundation and VIFM are in the final stages of negotiation over a world-first research project that will look in depth at the coward’s punch phenomenon:

Importantly, it will look at the issue from both the victim and perpetrator perspectives. We expect to be able to update you on progress on this incredibly valuable piece of work towards the end of 2020. It hasn’t all been plain sailing for the STCP Foundation, however and it is my sad duty to advise that the Board has postponed our Annual Fundraising Dinner, planned for Friday May 15 and our Awareness Week which was due in the preceding week.

I am sure you understand that we have no option given the global Coronavirus pandemic.

Thanks for your support so far and I encourage each of you to sign up to the Foundation’s social media platforms:

Thanks to all of you for your support and keep well during these crazy times!